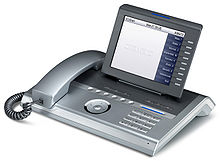 The OpenStage HFA Release Notes help you to find, in descending order:

Support for this Software Version is discontinued. Further fixes will only be done with OpenStage HFA V3 R0

This version is out of support