The OpenScape Voice is a native SIP-based Real-Time IP System that is ideal for both large and very large enterprises and for managed service providers. Designed for data center deployment, HiPath 8000 fits perfectly into the IT world. It allows companies to simply and cost-effectively integrate converged voice, multi-media and multi-modal services.

In a flat VLAN design, the VLANs are extended from one HiPath 8000 node to the other. In case of failure of an active node, the IP addresses of this node is transfered to the other. A drawback of this design is, that high redundancy can only be achieved when using redundant layer 2 networks with the Spanning Tree Protocol being used to remove loops from the network. However, note, that Spanning Tree problems can lead to 100% network load and to the unavailibility of both HiPath 8000 nodes. Also, Spanning Tree problems are easy to troubleshoot. We recommend to a Split Subnet design with a Spanning Tree less design if possible. 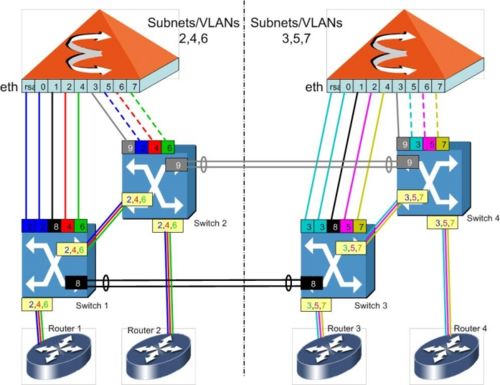