It is the target of Quality of Service mechanisms to minimize

Mechanisms like Queuing and Scheduling help to priviledge high prority traffic (e.g. real-time traffic) over other data traffic. However, if the sum of all high priority flows exceed the capabilites of network links or elements, those techniques will fail. An additional high priority flow might degrade the quality of all existing flows.

Call Admissin Control makes sure that existing flows will keep their quality by rejecting any additional high priority flow. In the terms of telephony, the call is rejected and will either receive a busy signal or is rerouted.

Unify OpenScape Voice has implemented a centralized static Call Admission Control which works in hub-and-spoke or star topologies. Topologies are abstracted to zones with unlimited bandwidth ressources which are interconnected by bottlenecks. If phone A_1 resides in zone_A only, if the bandwidth needed does not exceedand phone B_1 resides in zone_B and those zones are interconnected with a bottleneck link of 150 kbps, the call of 100 kbps is admitted, if no other call is using the bottleneck [link. Now, a second phone A_2 in zone_A wants to start an other 100 kbps call to phone B_2 in zone_B. Since the needed bandwidth would exceed the left bandwidth ressources of 50 kbps, the call will be rejected, preserving the call quality of the first call.

In the case of the OpenScape Voice solution, telephones are classified to be members of certain zones based on IP-addresses or telephone numbers.

Cisco CallManager makes use of the very same centralized static Call Admission Control and also is limited to hub-and-spoke or star topologies.

A standard way of performing Call Admission Control is Ressource reSerVation Protocol (RSVP), i.e. the IntServ Model. With RSVP, each end system that seeks to send a data flow will send an RSVP PATH message to its communication partner. Network elements along the path that are RSVP aware will add route records to the RSVP PATH messages; others will route the packets like normal IP packets. The communication parter will respond to the RSVP message with a RESV packet and will send it back along the recorded path. RSVP aware network elements now will perform the reservation, if enough bandwith is available or will indicate the failure in the RSVP RESV packet.

The most commonly classification scheme is to use IEEE 802.1p/Q priority bits for layer 2 switching and the Type of Service/DiffServ Codepoints within the IP header for layer 3 queuing. 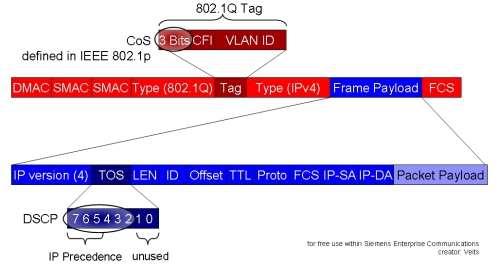 CoS and DSCP of Voice Streams

For voice (real time protocol, RTP) streams, Unify phones use the DiffServ Codepoint EF, "Expedited Forwarding" (i.e. decimal value 46, binary 101110) on layer 3. Since most network vendors map the first 3 bits to the IEEE 802.1p/Q priority (CoS) bits, it is recommended to use CoS 5 (binary 101) on layer 2.

CoS and DSCP of Signaling Packets

If an egress interface is congested, the network element needs to perform an action on packets. It needs to decide, which packets are sent with a higher priority than others, which packets will be stored and queued for later transmissions and which packte will be dropped.

Traffic shaping is used, if transmitting packets at wire speed at one network link would lead to congestion at an other network link. Consider a QoS capable router that is connected via 100 Mbps fast ethernet to a non-QoS-aware DSL modem, which in turn can send with a maximum transmission rate of 1 Mbps. In this case, the router should slow down the transmission rate to 1 Mbps.

The advantage is, that the router can make sure, that high priority traffic will be preferred over other traffic. If the traffic is not shaped within the router, the flow will hit the DSL modem, who will drop packet randomly.

For traffic shaping, the leaky bucket algorithm is used.

As long as there are no packet drops, TCP tends to increase the flow bandwidth. If the output buffer of a bottleneck link is filled up, without RED, packets of all TCP flows would experience packet drops (i.e. tail drops) at the same time. All TCP flows will slow down quickly, leading to a bad link usage shortly thereafter. Then TCP increases the flow bandwidth again, until the buffer is full again. This cyclic behavior is caused by TCP global synchronization.

RED will randomly drop packets, befor the buffer is full. With that, only few of the TCP flows are slowed down. With that, the bandwith usage of different TCP flows are decoupled from each other and higher sum throughput with less packet drops can be reached.

RED does not work with UDP, since UDP will not slow down transmission rates, when packets are dropped.