myPortal for OpenStage is the user interface for OpenStage 60 HFA and OpenStage 80 HFA phones. It allows office based workers �fast change of their presence �status and fast & comfortable �access to their voice mail box 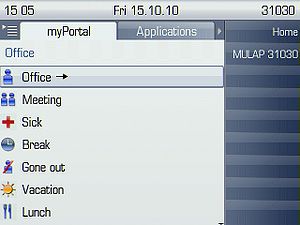 The currently set presence status is displayed in the main menu by the appropriate symbol and is visible to all other myPortal UC Smart and UC Suite client users.

To use this application the Web Service Interface of the communication platform must be enabled and in operation.

myPortal for OpenStage can be used in combination with the following web browsers (for configuration and administration):

As myPortal for OpenStage is a web-based service, no separate SW is required for use.

For operation of myPortal for OpenStage a UC Smart or UC Suite license is required.