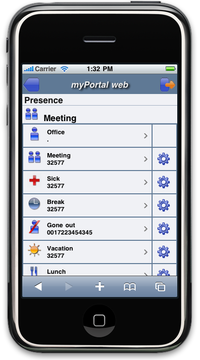 myPortal web lets you establish a connection and dial phone numbers directly from the web interface. Calls can be dialed via a dial-up keypad directly from the directories or from the voicemail journal. Phone numbers are entered in the same way as for outgoing calls from an internal telephone, namely with a prefix for dialing out. In addition, the canonical format is supported.

Redial function If you were not able to establish a connection, the redial function can be used to comfortably dial the phone number again.

The callback procedure is primarily used for special rates or flat rates that apply when connecting the telecommunications system to the wireless network.

The call-through procedure, in contrast, uses the special rates of existing wireless contracts for dialing into the fixed network. On the myPortal web user interface, the user can individually set the dialing procedure that should be given preference.

Independent of the smartphone contact directory, myPortal web offers the user three telephone directories with a search and dial function.

The internal phone book contains all internal users of the HiPath communications system, including their current presence status.

All contacts entered as a speed dialing destination in the communications system are available in the system phone book. The dialing procedure set for using the One Number Service is used when dialing from the phone books.

In addition to the playback function through a call of the voicemail on the smartphone, myPortal web provides additional control functions.

During the voicemail playback, the phone number and name of the sender are displayed for each message, provided that this information is available.

To use this application the myPortal entry Web Services must be reachable from the Internet.

A "Mobility Entry" licence has to be available within the telecommunication platform for every my Portal web user.