After typing in https://OS-ip-address into a Internet browser,the web based managemnet of the phone is opened. (OS-ip-address is used here a placehoder for the ip-address of the phone. Select administration mode and enter the appropriate password.

In this example the ftp server has the IP adr. 172.30.242.114 and port 21. The LDAP template file ODS_OS_LDAP.txt, which contain the LDAP mapping, is located within the root directory of the ftp server "/". FTP Server does not require a login, therefore anonymous can be used .

The LDAP template file has to be uploaded or copied previously to an FTP Server, which can be accessed by the OpenStage 60/80 phone. In case, that no FTP Server is available or accessible, a small FTP Server should be installed on a service PC, which is temporariliy connected to the network.

A suitalke and easy to handle ftp server is "3CDaemon" by 3Com. 3CDaemon is freeware and can be downloaded from several locations within the internet like

After installation the ftp server can ce started on the PC. Administration dialog can be open by mouse click to file --> configure selected service. 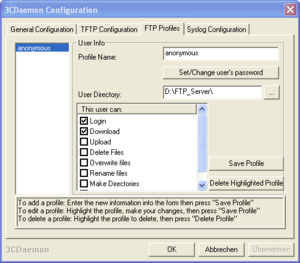