The busy lamp feature allows users to monitor the dialog state of another phone/user extension. This is indicated by the LEDs in an FPK. In the Asterisk community, this feature is called "Busy Lamp Field"; sometimes the term 'Direct Station Selection' is used for the same functionality.

The basic Busy Lamp Field feature allows the user to monitor the dialog state of another phone. The dialog state is shown by a distinct LED behavior:

In the basic configuration, pressing the FPK will call the monitored person in any call state.

There are four users: Leo, Alice, Joe and Bob. Leo is watching the extensions of Alice, Bob and Joe. Each of the extensions is configured on an specific FPK. The example shows the three different extension statuses. Joe is talking to another persion, Alice gets a call, her phone is ringing and Bob is in idle state, like Leo. The following picture illustrates this example:

Extension status on FPK: Joe is in busy state, Alice is in ringing state, and Bob is in idle state

Leo can see the status of the other people at any time by watching the LEDs on the FPK.

The BLF type can be used in scenarios where team members want to pick up the call for other team members.

The server feature type can be used in receptions, for example, where the receptionist wants to see the call status of all employees, but never wants to pick up the call for someone.

Depending on the configured type and the status of the observed party, different actions are performed.

To assign the BLF function to the FPK, proceed as follows: 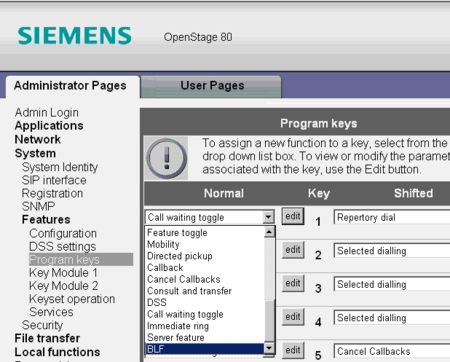 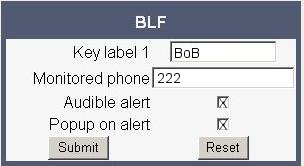 It might be necessary to configure a BLF pickup code to ensure that the pickup functionality will be started at Asterisk. This can be done at

To assign the Server Feature function to the FPK, proceed as follows: 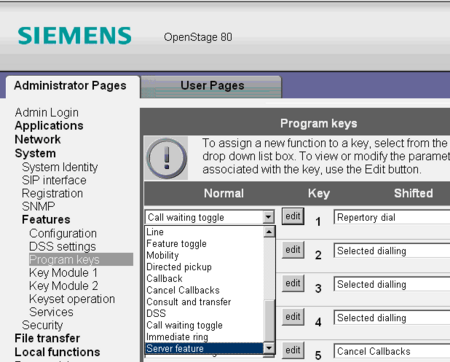 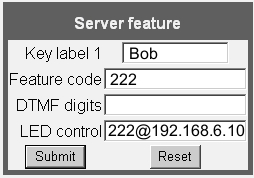 Key label - "Bob"
Feature Code - "222": pressing the FPK will always call Bob, independent of his line status.
DTMF Digits - not neccessary in this feature.
LED control - "222@192.168.6.10", a subscription for the LED will be sent to the server with the IP address 192.168.6.10. If no IP address is specified here, the request will be automatically sent to the SIP server configured for this phone under System > Registration.

The BLF feature gives the user the possiblity to watch the dialog state of other users. The feature is implemented according to RFC 4235. This document defines a dialog event package for the SIP Events architecture, along with the data format used in notifications for this package. The dialog package allows users to subscribe to state changes relating to another user. When the subscription is made, the user will receive a notification as soon as the state of an INVITE-initiated dialog on the other user's side changes.

After that the Asterisk PBK sends a notification to Leo's phone to tell the status of Joe's line. The table below shows an example notification:

The line status is delivered in the XML body of the notify message. OpenStage phones supports three different line statuses:

The idle state is notified within the dialog event subscription. The dialog state in the message body is terminated or left empty.

Here is an example for Joe's idle state sent to Leo.

The ringing state is notified within the dialog event subscription. The dialog state in the message body is early.

Here is an example for Joe#s ringing state sent to Leo.

The connected/busy state is notified within the dialog event subscription. The dialog state in the message body is confirmed.

Here is an example for Joe's connected/busy state sent to Leo.

A example call flow has been recorded. At the end of this call flow Joe is in busy (LED on), Alice is in ringing (LED blinking) and Bob is in idle state (LED off).